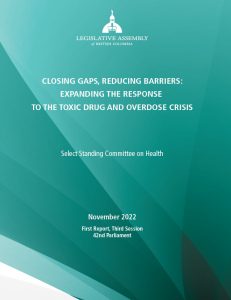 On Tuesday November 1, BC’s Select Standing Committee on Health released the report Closing Gaps, Reducing Barriers: Expanding the response to the toxic drug and overdose crisis. The report notes that the Select Standing Committee on Health (SSCH) gathered input from government ministries, health authorities, and other relevant agencies (PAN presented with CSUN), through written submission and consultations. “In total, (the Committee) heard from 118 presenters and received 881 written submissions.” It is the latest in the government’s approach to reducing deaths and injuries that result from the toxic drug poisoning crisis, which was declared a public health emergency in April 2016.

Media coverage of response to the report has included disappointment-  “The report stopped short of recommending bolder options many experts and advocates have called for” (The Tyee) and observation from politician Sonia Furstenau that the report is too timid (CBC News). CBC’s article also notes “Minister of Mental Health and Addictions Sheila Malcolmson did not signal any major changes in the province’s response to the crisis after the report’s release”.

We will keep members and allies up to date on developments and advocacy directions.