BC declared a public health emergency in April 2016 as a result of rising deaths due to overdose, which is now more aptly identified as deaths as a result of a toxic drug supply. This ongoing crisis has significant impact on first responders, including frontline staff at PAN member and allied organizations, and especially people with lived experience (PWLE). The resources provided here reflect resource requests from members and allies.

While these pieces are organized into sections, issues intersect, so please keep that in mind when scrolling through.  There is a lot of good and determined advocacy going on, and while we can’t represent it all here, we respect the many efforts for change.

For information on harm reduction and human rights in light of COVID-19, visit our COVID-19 resources page.

Substance Use News is a monthly collection of advocacy news and resources on the social, medical and political responses to the toxic drug supply crisis. Following the public health emergency declaration in April 2016, PAN centred discussions on substance use and harm reduction at our member conference in the fall of that year. Coming from community requests, we developed two initial reports in 2016 and 2017, and Substance Use News, an ongoing publication.

Visit the Substance Use News Archives page for additional issues and reports.

BC and Yukon Association of Drug War Survivors: BCYADWS is a drug user group based on advocacy, education and support.

Coalition of Substance Users of the North (CSUN) is a BC alliance of people who use or have used currently illicit/illegal drugs.

Drug User Liberation Front: DULF was formed in response to the ever-mounting overdose deaths in BC and across Canada.

Rural Empowered Drug Users Network (REDUN) A program for current and former drug users, and their friends, family, and supporters.
We want to be a part of the structures that serve us.

SANSU (Surrey Surrey Area Network of Substance Users Society) is an organization of current and former drug users in Surrey, BC that provides advocacy, harm reduction and social justice to people who use drugs in this region.

SOLID is a Victoria, BC-based organization of current or former drug users that provides support, education and advocacy.

VANDU: The Vancouver Area Network of Drug Users (VANDU) is a group of users and former users who work to improve the lives of people who use drugs through user-based peer support and education.

Crackdown podcast: This podcast came out of Vancouver’s Downtown Eastside, and the production team describes it as “The drug war, covered by drug users as war correspondents.”

Canadian Association of People Who Use Drugs is a group of people with lived experience of drug use; they emphasize the need for direct involvement of PWUD in policy making.

ONPUD Ontario Network of People Who Use Drugs

The Opioid Chapters presents stories of 11 people living on the front lines of a constantly shifting opioid landscape in Ontario.

Engaging People Who Have Used Illicit Drugs in Qualitative Research

A Guide for Paying Peer Research Assistants – Challenges and Opportunities

The groups listed above in People with Lived Experience are leaders in harm reduction and decriminalization advocacy. Other groups include:

Moms Stop the Harm is is a network of Canadian families impacted by substance-use-related harms and deaths that advocates for the change of failed drug policies, provides peer support to grieving families, and assists those with loved ones who use or have used substances.

HIV Legal Network is “committed to reducing the harms associated with drugs and the harms caused by harsh, misguided drug laws. Instead of prohibition and punishment, drug policy must be grounded in sound public health evidence, and in the principle of the universality of human rights.” Read about their drug policy work.

The Canadian Drug Policy Coalition is a non-partisan, evidence-based policy advocacy organization comprised of more than 50 organizations and over 7,000 individuals striving to end the harms of drug prohibition. It operates as a project within Simon Fraser University in the Faculty of Health Sciences.

National Safer Supply Community of Practice (NSS-CoP) is a knowledge exchange initiative led by London InterCommunity Health Centre, in partnership with the Canadian Association of People who Use Drugs and the Alliance for Healthier Communities. Its goal is to scale up safer supply programs across Canada.

Harm Reduction International is dedicated to reducing the negative health, social and legal impacts of drug use and drug policy. The organization is an NGO in Special Consultative Status with the Economic and Social Council of the United Nations.

Harm Reduction Fundamentals: A toolkit for service providers This CATIE toolkit was developed in partnership with a pan-Canadian working group of organizations and individuals with expertise in harm reduction.

Filter Harm Reduction Journal, run by a non-profit whose mission is to advocate through journalism for rational and compassionate approaches to drug use, drug policy and human rights.

Decriminalization for Simple Possession of Illicit Drugs: Exploring Impacts on Public Safety & Policing: The Canadian Association of Chiefs of Police (CACP) announced that the association is recommending that all police agencies in Canada recognize substance abuse and addiction as a public health issue to help reduce drug overdoses and is endorsing the decriminalization of personal possession of illicit drugs.

Practical Drug Decriminalization in British Columbia. “While the possession of illicit drugs for personal use (“simple possession”) is a criminal offence, individual provinces still have significant powers to redress some of the harms of drug prohibition.In light of the federal government’s failure to meaningfully reform drug policy, provinces like B.C.can and must take legal steps to effectively (“de facto”) decriminalize simple possession by re-directing police resources away from its criminal enforcement.” Pivot Legal Society

The Nurses and Nurse Practitioners of British Columbia (NNPBC) and the Harm Reduction Nurses Association (HRNA) call for the decriminalization of people who use drugs in BC. “As nurses who work in B.C. and provide frontline care in the midst of this public health emergency, we see firsthand the impact of criminalization on our clients, on their families, on our practice and our communities.”

Response to the Opioid Overdose Crisis in Vancouver Coastal Health. Vancouver Coastal Health Chief Medical Health Office Dr. Patricia Daly calls for decriminalization of personal possession of illegal drugs. “It is an acknowledgement that psychoactive substances, including opioids, will continue to be used by people for a variety of reasons, and the illegal nature of these substances is the primary risk factor for overdose death” (p. 29). 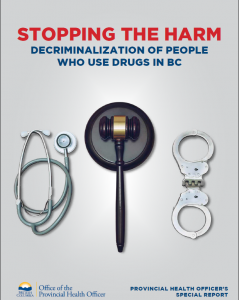 Stopping the Harm: Decriminalization of People Who Use Drugs in BC. In presenting this 2019 report, Provincial Health Officer Dr. Bonnie Henry cites two provincial mechanisms that could allow for de facto decriminalization of personal drug use. The first would use the Police Act to allow the minister of public safety and solicitor general to set broad provincial priorities with respect to people who use drugs (Stopping the Harm, p. 5). The second option, which also would use the Police Act, would add a provision preventing any member of a police force in BC from using resources for enforcement of simple possession offences (Stopping the Harm, p. 38).

Harm Reduction Satellite Sites: A Guide for Operating Harm Reduction Hubs from the Homes of People Who Use Drugs
This guide from CATIE was developed to be helpful for community-based service providers who would like to develop this kind of programming, or explore other models of providing health and harm reduction services to people who use drugs, particularly in residential and other community settings where they are most needed. (2020)

Operational Guidance for Implementation of Managed Alcohol for Vulnerable Populations, BC Centre on Substance Use (2020)

Indigenizing Harm Reduction: The First Nations Health Authority Indigenous Wellness team explores what harm reduction looks like from an Indigenous perspective, and how they facilitate dialogue with First Nations communities around the province. Scroll to bottom of page for video and slides.

What is Harm Reduction?  This explains the set of strategies and philosophies about reducing harm related to drug use and building a community of respect and support for people who use drugs.

Drug Checking as a Harm Reduction Intervention – Evidence Review Report (BC Centre on Substance Use, 2017)

Toward the Heart: This website was developed by the Provincial Harm Reduction program. It provides Naloxone information (and other drugs), training, and information on becoming a Take Home Naloxone site.

The Safer Bathroom Toolkit
Even when supervised consumption or overdose prevention site services are available, some people will use substances in bathrooms. There are ways of making bathrooms safer for people who use substances. This toolkit will help you to do that.

Addiction Practice Pod is a podcast focussing on addiction and substance use care for health care providers in British Columbia and Yukon.

List of overdose prevention and supervised consumption services in BC

How to Use Naloxone (3-minute video)

Being Part of Grief and Loss

Creating Cultures of Wellness: This video series with Vikki Reynolds can be viewed in separate parts or altogether to help teams build resilence and rediscover their strengths.

Psychological First Aid: Guide for Field Workers:  This resource from the World Health Organization explains a framework for supporting people in ethical ways that respect their dignity, culture and abilities. Despite its name, psychological first aid covers both social and psychological support.

“Leaning In” as Imperfect Allies in Community Work – Vikki Reynolds

Stories to support grieving children: picture books to support kids 4-10 who are faced with the loss of a loved one from substance use as well as suicide.

The Fight Against Stigma

All of the people listed in sections above are fighting stigma. Selected reading below.

The Way We Depict Drugs, and People Who Use Them, Must Change

The World Drug Perception Problem: Countering Prejudices About People who Use Drugs (2017)

Why We Should Say Someone Is A ‘Person With An Addiction,’ Not An Addict (2017)

How the Stigma of Drug Addiction Hurts All of Us

The World Drug Perception Problem: Countering Prejudices About People who Use Drugs (2017)

BC Centre on Substance Use Care Guidance:

“Working Together to Reduce Harm” is the motto of the Toward the Heart site from the provincial harm reduction program includes information on finding overdose prevention sites, what different drugs do, support for people who use drugs and how to report bad dope.

HealthLink BC provides free, non-emergency information including substance use or mental health. Alternate is a call to 811.

BC Centre on Substance Use

Canadian Institute for Substance Use Research

Canadian Centre on Substance Use and Addiction

BC Government page on substance use resources

The BC Centre for Disease Control provides Harm Reduction Reports that include coroners reports and maps showing overdose response from first responders.

2019: Stopping the Harm: Decriminalization of people who use drugs in BC 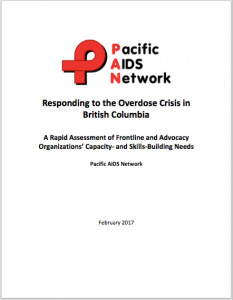 Close to Home: Families & Caregivers Set priorities for addressing substance use addiction in BC BC Centre on Substance Use, April 2018

The Opioid Crisis in North America (2017)

The Overdose Crisis – Where To Next? AIDS Vancouver Island, 2017