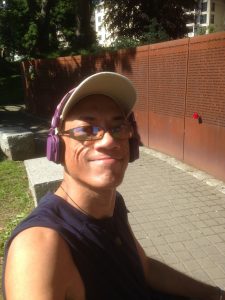 Darcy joined PAN in the summer of 2016, as one of the new Peer Evaluators working on the PLDI Impact Evaluation team. He comes from a varied career background and is currently a licensed educator and thespian (for anyone who might recall his 2015 Fringe musical – LOCO HERO JOE). Darcy is pleased to have just completed his third training workshop with PLDI (Bored, Get On Board!). He is also brimming with enthusiasm after attending the PAN Fall Conference and the Gay Men’s Summit (focusing on ‘stigma’ in the community).

What first piqued your interest in the HIV sector?

My experience with the HIV sector actually began in the mid-eighties as an undergraduate. One evening I heard they were giving a big lecture on campus in one of the academic buildings – I had no idea what HAART or GRID was at the time, and really a very rudimentary understanding of AIDS, so it was an overwhelming first exposure to the disease!

I have volunteered off and on in the gay community since then. I have been an active volunteer for years with stints at Positive Living BC (and its previous incarnation BCPWA), The Centre, and 2015’s IAS in Vancouver. I have also helped out in non-HIV specific community positions with Grandview Policing Centre in East Van, Gordon Neighborhood House in West end and the 2010 Vancouver-Whistler Olympics.

Most related social discussions I am privy to these days seem to be about developing little blue pills to keep you hard, while PREP tries to keep you safe from HIV. Prevention seems to be the overwhelming focus of HIV / AIDS focus right now.

There is also a big push for cosmetic cures, from rejuvenation therapies to implants. There are also growing concerns about side-effects of long-term HIV therapies on our overall health and longevity. And ever-present, are concerns about diminished memory, physical wasting and an aging HIV+ community. Researchers have their hands full!

How do you engage the community in your work?

I have tried to maintain a personal arsenal of helpful information from my various community engagements through the years and love to support my peers in their efforts to develop their self-advocacy. I am grateful to witness my peers’ journeys as they self-define their own journeys.

We are just heading into a place in the impact evaluation right now that requires me to be an active listener though – so I will be challenging myself to ‘shut up and listen’. For me, in the end, it is all about being supportive, attentive and productive.

If you had unlimited funds, which area would you invest in?

I am personally a big fan of the ‘oasis’ projects and really appreciate support systems that provide retreats, treatments and counseling. These offer a lot of tie-ins with my previous career incarnations and background interests. When I used to work in the travel and hospitality industries, I occasionally nursed a dream of running a healing space that offered holistic support – a spa-like environment with healing and nutritional therapies and that maybe tied into a food store or café. When I get busy, I sometimes have to remind myself to pay tribute to my soul, as well as my body. I would love to help others do the same and would channel my whimsical funds in that direction.

It would be so nice to pick up languages easily. I have studied French and Spanish, but am pretty sure I will actually have to learn the entire language before I am truly able to speak a lick of it.

I am also working on my overall skills at communicating inter-generationally, techno-speak and politics. I am a big fan of gay history projects and have been fascinated by computer technology for decades. And although I have no real interest in running for office, I do like to know what is on the agenda of those that do, and especially where it concerns my community.

I suppose I am saying that I am always open to being a better communicator!