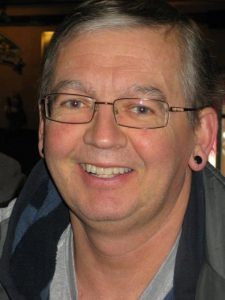 It is with sadness that we announce the passing of Ken Buchanan – a passionate and tireless activist, a true leader and an ally and friend to many.

Ken was born in Prince Rupert, graduating from Prince Rupert Secondary in 1975 and then from the BC Institute of Technology in 1978. Ken worked for 22 years with RBC followed by 5 years with the Gitxsan First Nation.

In 2004 Ken was diagnosed with HIV and he was also living with hepatitis C.

In January 2009 Ken joined the Board of the Pacific AIDS Network, serving for just under four years until his declining health including a diagnosis of blood cancer compelled him to resign his position in October of 2012.

Ken was a steady and valued contributor to the Network.  During his time with PAN, he also served on the volunteer Steering Committee that oversaw the creation and development of the Positive Leadership Development Institute (PLDI) here in BC. The PLDI is a program whereby people living with HIV/AIDS (PHAs) mentor and support other PHAs to realize their leadership potential and effect positive change.  Ken was a powerful champion of the PLDI and this really reflected his belief in the power of people to overcome any obstacle and to transform not only themselves but their communities.

Ken’s accomplishments through his volunteer contributions at PAN and at other organizations are far too many to list. Ken was also a courageous fighter, and persevered through tremendous physical challenges to continue with his work at local, provincial and federal tables.  His attitude was unfailingly positive and he was an inspiration to all of us who were fortunate enough to know him.

Ken, you will be truly and deeply missed – while our thoughts and hearts go out to Ken’s partner, William, and his other family members and friends at this time.