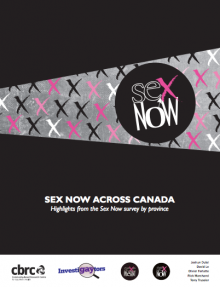 Sex Now 2011, Canada’s largest online gay health survey, collected data from 8,607 men who have sex with other men between September 2011 and February 2012 from every province and territory. The survey was designed to investigate social determinants affecting gay and bisexual men’s health. It was available on the Internet in both English and French.

Sex Now Across Canada features provincial breakout data. The questionnaire probed a series of interrelated topics including experiences with prejudice, mental health, social support, sexual health, physical health, and Internet use among gay, bisexual, and other men who have sex with men (MSM). This analysis presents demographic and sexual health variances among provinces.

In this report we selected data that we hope will be helpful in your work and grant writing. We look at sexual health data like condom use, Internet use, testing and risk of HIV, as well as issues concerning health care providers. We review these issues by age – under 30 and 30 plus – to give you some specific information on young gay men. We also review the issues by living environment – urban and rural. The report opens with a section on demographics providing information on who answered the survey.

Because we don’t know the size of the gay population, we have no way of obtaining a representative sample. We recruited a large diverse sample of Canadian men who have sex with men. We combined Yukon, Northwest Territories and Nunavut into Territories because of the small numbers participating. With low numbers participating from Territories, as well as Prince Edward Island, and Newfoundland & Labrador, please use caution when interpreting variances with other provinces.