The Food Security Study is a national community-based research study that examined the impact of food security on health outcomes of people living with HIV in Quebec, Ontario, and British Columbia.

This study was community-led and took place in multiple sites across the province. There were 328 HIV-positive people in BC who were interviewed by a team of dedicated Peer Research Associates.

The study team defined food insecurity as having uncertain or limited availability of nutritionally adequate or safe food or the ability to get [and have access to] food in socially acceptable ways.

The key finding of the study, in the initial analyses, is that people living with HIV in BC face much greater levels of food insecurity or hunger than the general population. Three out of four people interviewed  in BC were food insecure. These were similar findings to people interviewed in Ontario and Quebec. People interviewed who had experienced poverty, difficulty meeting housing expenses, moved recently, symptoms of depression, or used substances in the past 12 months were more likely to be food insecure in our province. 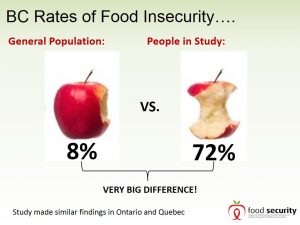 Analysis of data collected and knowledge translation work for this study is continuing. The study team, led in BC by Dr. Brian Chittock – Executive Director of AIDS Vancouver – has received a CIHR Dissemination Grant to develop more knowledge translation materials. Stay tuned for future updates!

Questions? Feedback? Get in touch!