Last week, almost 70 individuals from around the province joined the Pacific AIDS network in Richmond for a lively 2-day event called Knowledge to Action: Strategic Directions for Community-Based Research (K2A2013). The enthusiasm and engagement from the diverse participants – from peer research associates, to community-based organization representatives, to academic researchers, and others – reminded me of how movements are built.

Movements are built when passionate groups of people respond to an invitation to come together and talk about how tools, such as those provided by community-based research, can be used to create positive, sustainable change in our communities. Movements are built when we take the time to get to know each other, to share experiences, and to put our minds together to determine what areas need our energy most.

And here in BC, I feel that I can certainly say that we are building a movement that values many different kinds of knowledge in in determining how we can make an impact around HIV/AIDS.  At the K2A2013 event we heard about projects that are underway from the Opening Doors to Harm Reduction project in Quesnel, to the work of the Community Based Research Centre in Gay Men’s Health in Vancouver, to the Food Security, CHIWOS and Stable Homes, Strong Families, which have provincial and national focuses, in addition to others. 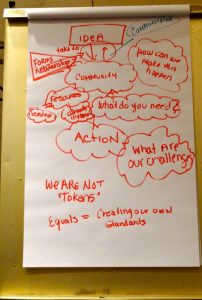 Also inspiring were conversations that we had around where the model of “peer researchers” is going – how do we build on the momentum of ways of engaging peers (whether they be people living with or at risk of HIV, gay men, Aboriginal people, or women) in research within their communities. In looking at what areas we can work on, the group identified a new way of conceptualizing the role of peers (see image on right) and also pointed to several areas for training and capacity building.

Leaders within community organizations – the Positive Women’s Network, the Canadian Aboriginal AIDS Network, the Health Initiative for Men – shared their strategies for when researchers “come knocking,” which included several resources that we’ve added to our CBR toolkit here.

A highlight of the conference was hearing about the new national Aboriginal HIV/AIDS Community Based Research (AHA) Centre and REACH CBR Collaborative Centre – a hands on session in which participants engaged in concept mapping around several areas that were identified as priorities for research.

The event also featured other inspiring speakers – including Carrielynn Lund a Métis researcher from Alberta, to Vancouver locals Katrina Pacey, Pivot Legal Society, and Kate Shannon, BC Centre for Excellence in HIV/AIDS – all of whom inspired with stories of relevant examples of how research knowledge can and is translated into change.

Jamie and Patrick present the concept map from their group.

While there are many other highlights from the event, we will be producing a short event report soon, which will include more details on the research and capacity building priorities identified by participants. We also had an amazing team of photo rapporteurs who captured the event within the frame of “How can we move research to action?” and their presentation can be found here.

I’ll sign off by highlighting a new development in the CBR world here in BC. At the K2A2013 event there was a panel of amazing speakers around HIV and housing research, which included an update from Positive Living Positive Homes, a project that PAN has played a key role in developing over the past few years. And, just this week we heard that our Operating Grant proposal to CIHR was successful! So as we move forward after a great event, it is really incredible to know that we have the resources we need to take the next step on another important, community-driven project.

A special thanks to the Canadian Institutes for Health Research for funding this event, and to the Centre for REACH in HIV/AIDS and the Canadian Aboriginal AIDS Network for their support.