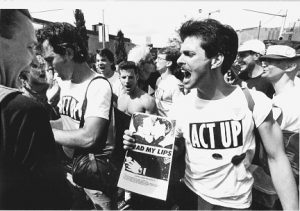 Sarah Schulman’s latest non-fiction book, The Gentrification of the Mind (University of California Press, 2012) examines the intersection of the American AIDS crisis and urban development. She was the first person in America to write on AIDS and the homeless (The Nation and The Village Voice). Twenty five years later on April 25, 2012, Occupy Wall Street teamed up with ACTUP along with supporters from Housing Works, Health GAP, National Nurses United, OWS Healthcare for the 99% Working Group, Visual AIDS, MIX NYC, Le Petit Versailles, Queerocracy, Queering OWS and other groups who converged for a daylong siege in Lower Manhattan. Schulman also recently co-produced United in Anger: A History of ACT UP (dir. Jim Hubbard, 2012), the new feature length documentary about the birth and life of the AIDS activist movement from the perspective of the people at the height of the epidemic. As an extension Schulman and Hubbard’s collaborative ACT UP Oral History Project, the documentary weaves between oral histories of members of ACT UP, as well as rare archival footage, depicting the lives lived and lost as ACT UP targeted corporate greed, social indifference, and government neglect.