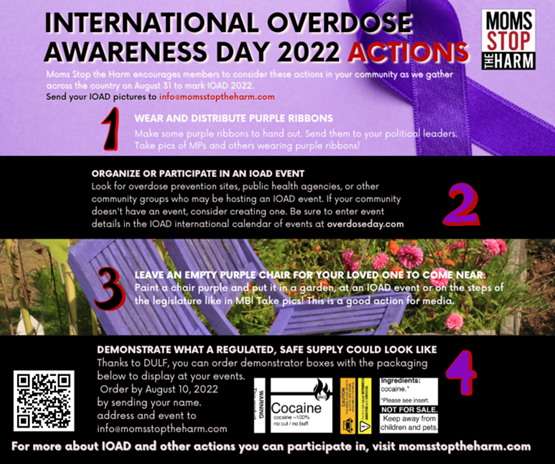 On International Overdose Awareness Day this year we’re shouting out to Moms Stop the Harm, a group that was started with love and fury and continues on with the same grace and grit.

Moms Stop the Harm is urging everyone to support International Overdose Awareness Day (IOAD) and has a list of suggestions. Wear and display purple ribbons; make your community aware by tying purple ribbons to trees and utility poles; paint a chair purple to honour lost loved ones and post it to social media. Organize an IOAD event or attend one.  If you’re on Facebook, visit the Purple Ribbon for Overdose Awareness page hosted by MSTH. It’s a group to remember and share ribbon photos, memories of loved ones, and resources. Encourage businesses to light up in purple to recognize IOAD for either August 31st or the entire month of August if possible.

Moms Stop the Harm (MSTH) began when three mothers in BC and Alberta connected after each had lost a son. They personally witnessed the difficulties their sons went through with substance use, sought each other out for support, and wanted to support families going through the same. They’ve become a strong voice for evidence-based harm reduction, including advocacy for changes on substance use policies and laws in Canada.

Since it was officially formed in 2016, MSTH membership numbers have grown across Canada with many provinces represented. The staff team includes an Indigenous Strategy Lead and Indigenous Liaison as they work to fulfill their mission: “We advocate to end substance use related stigma, harms and death.”

To provide support for parents, partners, siblings, and friends of people who use substances, MSTH offers groups in eight provinces and virtually. Learn more about what to expect, read about others’ experiences in the groups, and how to find one for yourself or someone you love at Holding Hope Canada. For people who have lost a loved one to substance use related harms, they also offer support through Healing Hearts Canada. This site also provides what you can expect, and resources to deal with grief.

MSTH regularly rallies for better awareness of how drug policy contributes to overdose and deaths. They support comprehensive harm reduction that includes calling for drug decriminalization. “We want to be out front and centre and let (Provincial premiers) know that we’re not going away, we want them to make changes,” MSTH member Melanie Cunningham said. “We want all of Canada to take action.”

IOAD has been recognized since 2001 and is now one of the largest annual campaigns to end overdose, remember without stigma those who have died, and acknowledge the grief of the family and friends left behind. It spreads the message about the tragedy of drug overdose death and that drug overdose is preventable. It is Time to remember, Time to act.

According to the BC Coroners Service, deaths due to illicit drug toxicity in BC has climbed to  nearly 6 deaths per day – this makes drug overdoses the most common cause of unnatural death in BC, particularly for males aged 30 to 59 that account for nearly three quarters of these deaths. Despite the declaration as a public health emergency in 2016 the number of deaths continue to increase to an all-time high – in the most recent release, the BC Coroners report states that from January to May of this year there have already been 940 suspected illicit drug toxicity deaths.

The provincial standing committee on heath, a committee involving MLA’s from all three provincial parties, has conducted a public consultation inviting individuals and groups from across the province to provide recommendations on how the government can address the overdose crisis and poisoned drug supply, and improve government services, support and resources. PAN Executive Director J. Evin Jones and Charlene Burmeister, founder and Executive Director of the Coalition of Substance Users of the North (CSUN) presented to the committe on July 5, 2022. The full transcript of the presentation including the Q and A can be found here. The committee is expected to release its full report on November 2, 2022.

On the national stage, the federal government signalled a shift in Canada’s drug policy with an announcement in May that starting January 31, 2023, people in BC will be allowed to possess small amounts of some illicit drugs – this means there will be no arrests, charges or seizures for personal possession at or below the 2.5 gram threshold. BC provincial Minister of Mental Health and Addictions Sheila Malcolmson noted “The fear of being criminalized has led many people to hide their addiction and use drugs alone. And using drugs alone can mean dying alone.”  Read more here.

In support of IOAD, Moms Stop the Harm (MSTH) is encouraging Canadians to get involved in actions, small or large, to bring awareness to the global IOAD campaign:

Since 2016, PAN has considered drug policy and responding to the overdose crisis a key part of the work we do. We offer a variety of online resources including Substance Use News; Harm Reduction Instead of Criminalization; Overdose Prevention, Care and Recovery; Peer Voices and Resources; Harm Reduction; Grief, Loss and Resilience; The Fight Against Stigma; Treatment Resources and Care; Reports, Recommendations, and Research.

Additionally, resources are available from other organizations noted in this blog post, including: