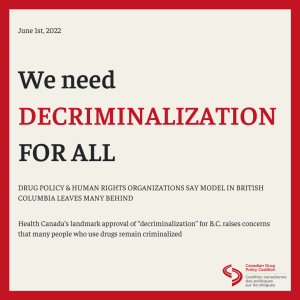 June 1, 2022 – A growing group of drug policy and human rights organizations across Canada — comprising people who use drugs, health professionals, legal experts, academics, and others — say the Government of Canada’s latest move to decriminalize drug possession should go further to protect everyone, in particular those most endangered by drug prohibition and the drug toxicity crisis. We support policy that moves the needle forward; however, it is disappointing that decriminalization under the model announced on May 31st will not protect all people who use drugs from the harms of criminalization. We support progress, but we dream bigger. We want full decriminalization for all.

Yesterday, the Government of Canada, led by its newly created Ministry of Mental Health and Addictions, joined with the Government of British Columbia to announce implementation of B.C.’s requested exemption to the Controlled Drugs and Substances Act (CDSA). BC is the first jurisdiction in Canada to effect this policy change. The policy provides legal protection to adults in BC who possess illicit drugs up to a cumulative total of 2.5 grams.

Yesterday’s announcement validates the efforts of people who use drugs and their allies across B.C. and Canada, who have for decades led the charge for drug decriminalization. But the announcement also signals a missed opportunity. A cumulative threshold quantity of 2.5 grams leaves many people who use drugs behind, namely those living in rural and remote communities who already bear the disproportionate brunt of drug prohibition and the drug toxicity crisis. People purchase larger quantities of drugs for myriad reasons: geographic restrictions, personal mobility reasons, and to limit interactions with the illicit drug market. Concerns over too-low threshold quantities were expressed repeatedly to BC and Health Canada by BC’s own Core Planning Table for Decriminalization and the Board of the Vancouver Network of Drug Users (VANDU) — to no avail.

This decision comes just as a more progressive drug policy bill, Bill C-216, is up for vote in Parliament today, on June 1. It is clear that the timing of the announcement is meant to hamper the progression of that bill through to committee stage, whereupon it could be further strengthened. Nonetheless, we call on Members of Parliament to listen to the voices of experts in this field and vote Bill C-216 through to committee stage today.

The fact that Canada is not considering national action towards decriminalization is shameful at this juncture, particularly as three jurisdictions have already applied for exemptions to date. The piecemeal approach the Government of Canada is now clearly taking does not adequately address the urgency of the drug poisoning crisis in this country.

We will continue to push for decriminalization for everyone and to turn the page on an outdated drug war that continues to kill as many as 20 people each day in Canada. Criminalization has failed, and there is no need to continue along this misguided path. Truly, a systems change is required in the context of a public health emergency caused by the system itself. We must decriminalize drugs and the people who use them, and provide access to a legal, regulated supply. Canada cannot wait.