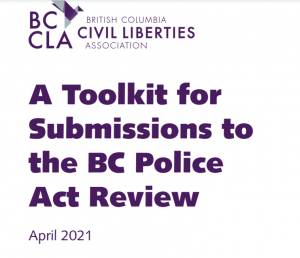 Share your voice! The Legislative Assembly of BC has appointed the Special Committee on Reforming the Police Act and BC Civil Liberties Association (BCCLA) has developed a toolkit for submissions.

The Police Act governs policing power in the province. The Legislative Assembly of BC has appointed the Special Committee on Reforming the Police Act to examine and make recommendations on reforms related to policing under the Police Act. We need your help to get our voices heard.

In the last year, how many stories did you encounter in the news that were about police or policing? Police are one of the most powerful institutions in our society. They conduct armed wellness checks that can be fatal on people experiencing mental health distress. Police patrol schools and public transit. They profile and street check Black and Indigenous communities, and harass homeless people who live in public space. They arrest Indigenous land defenders in militarized policing operations.

We must question this power. Join us to demand a radical transformation of policing.

The Special Committee on Reforming the Police Act are now accepting written, audio or video submissions from the public on changes you want to see. The deadline is April 30, 2021 at 5 PM Pacific time. We invite you to make your own submission, if you are comfortable doing so.

Your submission is considered a public document so do not include any confidential information in your submission.

Here are some of the key points made by the BC Civil Liberties Association that you can consider in crafting your submission. See more detailed information on these points.

1. The Province must work with Indigenous peoples in BC to align the Police Act with the United Nations Declaration on the Rights of Indigenous Peoples.

5. Moratorium on Police Use of Force and Surveillance Technology

Read the BCCLA’s submission, along with their key points in the toolkit.