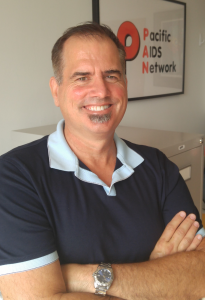 PAN is pleased to welcome (back) Marc Seguin, who recently joined the Training and Leadership department as the Positive Leadership Development Institute Manager. Marc was one of the original trainers for PLDI when PAN introduced the program ten years ago. Read about other members of our team in the Meet the People at PAN series.

What sparked your interest in working in the HIV or hepatitis C community?

I have always been attracted to a sense of “Community”; for me firstly it was the LGBTQ2 community, this is where I landed on a personal level and found my place and established cherished connections. Then the HIV community became my neighbourhood in 1996; I along with so many people from the LGBTQ2 “hood” became directly impacted by HIV. There was so much loss -so this was very personal for me to make a difference. I started initially as a volunteer with Friends for Life and then was on the Retreat Team with Positive Living BC these both were extremely rewarding experiences. Over time I found myself engaged five days a week and on weekends with these roles and eventually found myself to be a career-volunteer. In 2006 I took a leap of faith and transferred my built skills into paid work with Positive Living BC. I was fortunate enough having to have been engaged with them as a staff member from 2006 until 2019 as the Manager of Volunteer Services.

What kind of impact do you hope your work has on the “real world”?

In my new role now as the Manager of the Positive Leadership Development Institute (PLDI) here at PAN, I hope to provide as many HIV positive people as possible in BC the opportunity to hear about and attend our trainings on Leadership Development- which is by and for HIV-positive people! As I have had the value of mentoring, I would like others to have the opportunity to broaden their skill set and spread their wings and engage their skills however they would like, either in their HIV community or just community- however they define it. This is a program that supports people who are living with HIV/AIDS to realize their leadership potential and increase their capacity to participate meaningfully in community.

What’s an exciting thing you are working on now?

I would never have thought back in 1996 that today I would be working with my colleagues at the Ontario AIDS Network and COCQ-SIDA in Quebec on a national collaborative Leadership Development Program initiative- this is very exciting. The idea that we are working together as program managers interprovincially so we can expand the PLDI program for HIV-positive people in the country is truly a privilege.

What are you looking forward to in your work over the next year?

Over the next year and beyond I really look forward to engaging our graduates of the PLDI program in “next steps” of the program. After a grad has taken the training – how can I help them work with their organization / agency to connect to the principles of MIPA (Meaningful Involvement of People living with HIV and/or AIDS)? I am hopeful and look forward to working with agencies which see the value of the person living with HIV- their lived experience and all they have to offer. I want to support bringing “Nothing about us -Without us” to action.

If you could work with a celebrity, who would it be and what would you be doing?