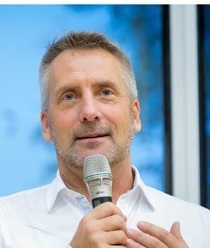 This is the third in a series of monthly blog posts representing perspectives on potential governance changes at PAN. These posts represent voices across the network – staff, PAN Board members, people living with HIV, and community members – sharing their thoughts on these changes. This month we hear from Darren Lauscher, who has been connected with PAN for many years. Darren recently met with Janet Madsen to share his take on PAN’s journey.

Janet: Your experience and history with PAN is an asset in talking about future directions. You’ve been a part of the PAN community since 2002. You’ve represented a community partner as a PLHIV, and you were on the PAN Board for 7 years, from 2008- 2015. You’ve also -been a key team member on a number of province-wide research projects: Food Security; Positive Living, Positive Homes; the BC People Living with HIV Stigma Index and Making It Work. You sit on the National Steering Committee for the Stigma Index Project, are working on a Peer Mapping project, and you’re in your 6th year on the CATIE board representing the Pacific region.

You were on the PAN board in 2013 when the decision was finalized to include HCV and other related conditions in the mission. How do you think that decision has affected PAN’s reach in supporting organizations providing frontline services over the past five years?

Darren: We should actually go back farther than five years, because the conversation about including HCV started years before we put it into the strategic plan and mission. The groundwork was being laid long before. The PAN response evolved because members brought it to our attention that they had new emerging needs that in turn affected their clients and members.  The HIV community overall has “done” HIV really, really well. We get a platinum star on how to collectively do well – and also to provide a comprehensive response to changing needs including beyond strictly HIV.

We knew that when you have an elephant in the room, it’s good to acknowledge it. We wanted to have collective, respectful conversations about HCV, harm reduction, mental health and other related conditions and didn’t want the conversation to become polarized.

There was a lot of thought and input by PAN staff, board, agencies, partners and stakeholders to frame those many conversations. PAN learned how to bring disparate voices to a collective voice to move the work forward. We learned how to include different voices and opinions, and if at times those voices choose to step away, we knew how to welcome them back.

Conversations on enhancing or building upon our members’ knowledge and capacities working on comorbidities like HCV – and how to frame our strategic plan and mission – informed the changes we made in 2013.  So the changes reflected in the Strategic Plan the board approved in 2013 was a formal acknowledgement of the work PAN and our member groups were already doing. The 2013 mission and strategic plan recognized that HIV doesn’t exist in isolation.

Janet: PAN has a responsibility to its member groups and to PLHIV to also address social issues like housing, food security and stigma. How do you see the legacy of HIV advocacy and capacity building strengthening the response to multiple health issues required of so many organizations today?

Darren: Having a bigger perspective is important. HIV work has always adapted ahead of the curve, as it’s needed to. We’ve been able to see where we need to put our energy, rather than stick our heads in the ground. Member groups listened to their PLHIV members, communicated with PAN, and PAN was nimble enough to shift. We’ve been able to have those difficult conversations about emerging issues and have bridged with other groups and voices as needed. It hasn’t been easy but we do it. We respond.

Janet: We have heard different points of view on making changes to our governance. Some people say “Finally” and others fear that the voices of people with HIV could be diminished. What is your take on this?

Darren: You need to include people with different perspectives and experiences and bring their voices to the table. Because our mission includes HCV, it’s important to extend the invitation. People from the HCV movement have always been present at PAN, we just haven’t formally recognized that. There have always been people involved with PAN who recognize the significant value of including the voices of health issues other than HIV, and historically it has happened.  We don’t live in an HIV-isolated bubble. We recognize the voices that have been part of PAN’s rich history and the passionate community as we look to the future. We need to evolve to stay current and ahead of the curve so we remain a powerful and respected voice in BC and Canada.

To help support the discussion on potential governance changes at PAN, we have created a gateway where people can ask questions and/or request to be contacted by a member of the PAN Governance Committee: [email protected].