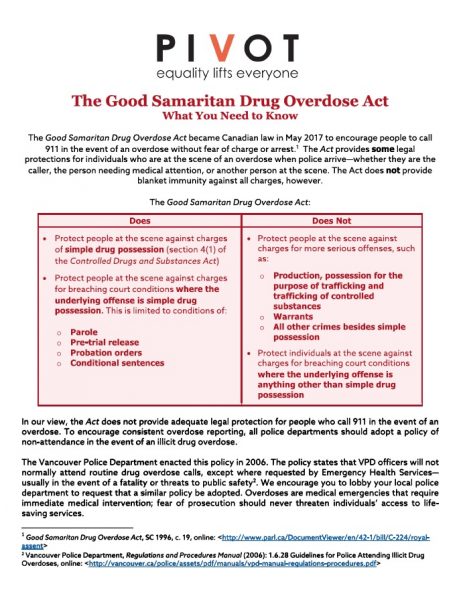 Pivot Legal Society has created a 2 page explanation of the new “Good Samaritan Drug Overdose Act”, which became law in early May 2017. The law is meant to encourage people to call 911 in case of an overdose. The protections provided by the law, however, are limited.

We believe that calling 911 needs to be the top priority when lives are at stake; however, it is important that people understand this new law and can explain it to people who may be affected by it. The law has some serious limitations, most of which impact people with complex criminal justice involvement.

This information is designed to be a tool to help explain the Act to people who may be at risk of overdose or who may be at the scene of an overdose. It is not intended to discourage people from calling 911 in case of emergency. Calling 911 means help will arrive. A person is not automatically detained by police merely for being at the scene of an overdose and anyone detained by police has the right to silence.

We believe this law does not go far enough in its protection. We continue to hold the position that an overdose is a medical emergency and that police should not attend overdose calls except where there is a fatality or where they are requested by emergency health services due to a specific threat to public safety. In cases where police do attend, they should be there to ensure the safety of everyone at the scene; overdose response should not be a basis upon which to conduct criminal investigations except in exceptional circumstances such as violence at the scene of the overdose. The Vancouver Police Department is the only department to date that has adopted a policy of not attending overdose calls.