At PAN’s Exploring Effective Interventions for Viral Hepatitis, STI and HIV Prevention last week, Valerie Laub performed and spoke about the one act play HIV Unmasked, a project of Positive Living North. Janet Madsen from the Positive Women’s Network (PWN) participated in the session and originally wrote below post for PWN blog.

I’ve never thought of HIV as chatty, and certainly not coy.  People love to give personalities to everything from dogs to death, and HIV is often cast as a vicious thief of health and youth. What if we paint a different picture? What if HIV is a charmer who wants nothing more than to get together and hang out? Is that so bad?

I was quite taken with this idea when it was presented in the one act play, HIV Unmasked. It’s part of a project of Positive Living North (Bulkley Valley) in Smithers, and I saw it at the Pacific AIDS Network conference yesterday. The play is part personal stories and part 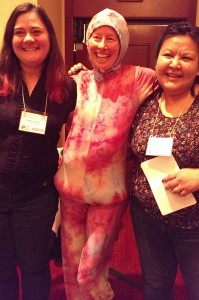 The power of stories is undeniable, and they have helped many people with HIV realize they aren’t alone. Stories also help people who don’t have HIV to understand what kinds of situations can lead to HIV transmission. The community behind HIV Unmasked know this and used storytelling and science to create a great education piece.

Marilyn Morrison and Melanie Monds talked about the work behind the scenes getting people involved. I’m grateful to the folks who bravely shared their stories; I imagine the huge fear of being exposed in the small town of Smithers (pop ~ 5,400). To protect confidentiality, Melanie acted as “middle man”, passing the written stories on to playwright Valerie Laub. Valerie used them to make a series of scenes that capture different things people feel about life with HIV, from the desperate loss of a lover and the dreams that were shared to the discovery that life has a profound meaning when you’re diagnosed with HIV.

As a performer, Valerie shares the stories of people with HIV while wearing masks to generalize the truth that these could be anyone’s stories. Her face is visible when she plays HIV, who is at times sassy (“I promise to be quiet. You won’t even know I’m here unless you get tested.”) and other times sour, like when HIV treatment is mentioned.

HIV is totally dependent on social relationships, and Valerie played this wonderfully. As HIV, she tried to convince the audience to make light of HIV transmission points: bodily fluids, behaviours and situations that can lead to HIV transmission risk, and assumptions about “nice people” not getting HIV.  She also hit on the power of stigma- “Silence, secrecy, I love it!” she crowed. I’ve never thought about HIV as a friendly virus that would be a “good roommate,” but HIV sure tries to make the argument.

Through the process of the play’s development, those who shared their lives were able to give feedback on it, ensuring their stories were presented as they hoped. One man who wanted to disclose publicly but didn’t feel safe to do so checked in numerous times to see how his story was being received. It created a different kind of support model and it worked.

You can tell I was wowed. Great support. New approach to HIV education. Fantastic.