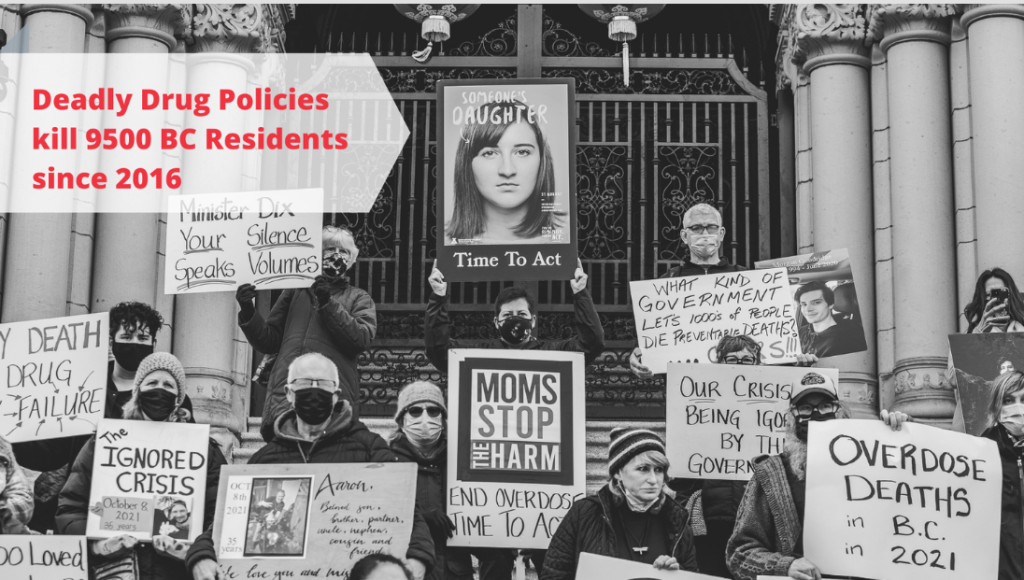 April 14 is the 6th anniversary of the Public Health Emergency of overdose and overdose deaths in British Columbia. Yet again, the anniversary is coming on the heels of the deadliest year ever – in 2021 2224 people were lost to drug poisoning. In January of this year, 207 people died, the fourth consecutive month in which more than 200 lives were suspected lost to the illicit drug supply. These numbers speak volumes and feed into the collective frustration and grief at the lack of urgent, tangible actions by the government to address this preventable tragedy.

Moms Stop the Harm (MSTH), in coalition with the Canadian Drug Policy Coalition, AVI Health & Community Services, and SOLID Outreach Society, is organizing “Cut The Red Tape” rallies for Victoria, Vancouver and other major cities, demanding action on the overdose crisis on this day of Action and remembrance, starting at 11 AM on April 14.

Calls for the province to implement recommendations from the BC Coroner

Referring to the “Cut the Red Tape!” rallies, Leslie McBain, co-founder of MSTH, states “It’s about a full health-care sector response led by the government to rapidly implement a continuum of care, including a safe supply, to support people who use drugs in our province.”

On March 9, the BC Coroner’s Death Review Panel provided a roadmap for the government in its report. “This report includes realistic, actionable recommendations that the panel believes will reduce the number of people dying due to toxic, illicit drugs in our province,” said Michael Egilson, Panel chair. “We recognize that many of the timelines in the report are aggressive, but COVID-19 has demonstrated how swiftly policy-makers can act when lives are at stake – and we know that every month of inaction equates to hundreds more lives lost.” (news release)

One month on, the “Cut The Red Tape” rallies will be demanding the implementation of the Panel’s recommendations, asking Premier Horgan and Minister Dix to answer the following questions:

PAN fully supports Moms Stop the Harm and others in their call for immediate, evidence-based solutions that will save lives now. Whether attending one of these events in your community, holding one of your own, or otherwise marking April 14 in solidarity, together we will continue to call for change and for accountability from the province.