Valerie has worked on various projects with PAN. 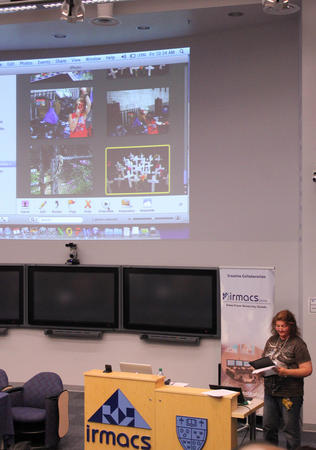 Valerie Nicholson is a grandmother, mother, and proud resident of Vancouver’s Downtown Eastside (DTES). She is the co-founder of the Harvest Organic Coop, a fruit and veggie coop for people with compromised immune systems, those affected and infected, housed (gratefully!) at AIDS Vancouver. She is also a nutritional outreach worker for the DTES Kitchen Tables Project (where she often gets to dress up as a broccoli) and volunteers with Charlie’s Food Bank through the SPCA. Valerie also facilitates two support groups for women with HIV, one for Aboriginal women and one for women in the DTES. Valerie is a Peer Research Associate on the National HIV and Food Security Study, a photographer and presenter with “The way I see it: a photographic exploration of housing and health among persons living with HIV in Vancouver” knowledge exchange project, and a research consultant with the Canadian HIV Women’s Sexual and Reproductive Health Cohort (CHIWOS) study and the Positive Living, Positive Homes research project on housing and HIV in BC.

How did you get involved in community based research?

It was a coincidence – a case of being at the right place at the right time. I was just coming out of my addiction and my doctor was pushing me to get involved in the community. I was asked to attend a workshop in the community as a peer representative and there I was, listening to the presentation and two people around me where having a chat – and one was Terry Howard [CBR facilitator with Positive Living BC] and he was looking for someone who was respected and trusted in the DTES to be a peer research assistant (PRA). I was referred as a possibility. I then went to the first-ever job interview of my life (I had always just gotten jobs without this step), and I got the position as a PRA on the Food Security Study.

Although I am so new at this, I think I can say that a lot has changed since I started. The DTES can be a fast place to gather data – researchers come in, wave around their $10 and get their data quickly. But in the community we have a term for those researchers who come in, do interviews and are never seen again – we call them “drive-bys.” A lot of us were left feeling used and abused – where were the results?  I hear people speak at conferences but it seems like their research stops there. 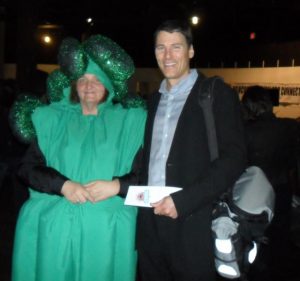 Valerie informs Gregor Robertson about the importance of food security at a Project Connect event in Vancouver.

My involvement in food security research as a PRA has helped me start the Harvest Coop.  When I was homeless, I was addicted to food banks and after I was housed and had work I was still going there. I wanted to find a way to get myself out of that cycle. While interviewing for the food security survey, I found out how much it hurts people to stand in the food bank line and being a researcher helped me change the way I saw myself. The Harvest Coop offers a hand up – even if people start by purchasing $5 of fruit and veggies a week, it’s a start. Food banks are necessary but we’re the in-between. I figured this out by being a PRA and then founded the Harvest Coop.

What was your most memorable moment as a peer researcher?

It was when I went to present in Houston Texas to doctors and people with degrees. I was the only person there without a degree, without letters behind my name, and it was me that got a standing ovation. One of the CEOs of one of the big organizations came up to me afterwards crying and he said to me, “You are not of my world.” He told me how he was one of the people sitting behind his gilded desk, pushing out research and not knowing what happened with it after it went past his desk. He said that my speech changed his life and way of thinking. He asked for my advice of how to change things, what to do differently. I told him that peers have to be involved at the very beginning of the research to the very end – full circle. He committed to trying and then he said, “You are an angel.”

I have really loved public speaking and learning about the gift of my voice. My story is also being published in a book on CBR ethics and is about how I work. I’ve also been asked to be a participant in an upcoming documentary that will follow 10 people living with HIV in Canada. These experiences have made me feel that even if I don’t have a degree, I have experience from the University of Life. It has changed me. I had so much self-stigma and I am now losing it because I realize that my information is very important.

If you had unlimited funds, what area of research would you invest in?

I think I would put it to studying the effects of menopause on women with HIV and what it does to our memory, to our bodies. This is so needed because as women with HIV live longer lives, there is not enough research that has been done in this area and we need to know more.

I’ve thought about this question a lot and I have to just say that I am so grateful for the talents I’ve been given and that I wouldn’t want any more. I have been given the gifts that I need.